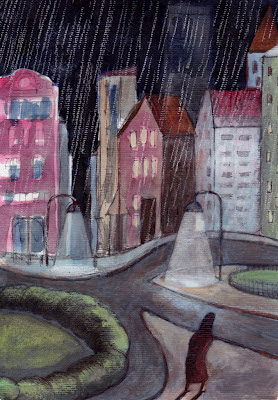 This is a painting of a recurring dream in which I'm lost in a strange city at night.  The streets are dimly lit and almost deserted.  I hurry along on foot, looking over my shoulder, seeking familiar landmarks, but there are none.  With every step I only seem to go further into unknown territory.
This dream is eerie, but nothing bad ever happens - I'm just lost.  I suspect that the dimly lit city is my brain and the streets that I wander are my neural circuits!
Artist Jesse Reklaw created a cartoon strip called Dreamtoons, based on other people's actual dreams.  Unfortunately his official website Slow Wave has been listed as an 'attack' site and unsafe, but I found a selection of his funniest Dreamtoons on this blog: http://hairygreeneyeball2.blogspot.com.au/2010/02/jesse-reklaws-dreamtoons.html.   The dreams are so ridiculous you just know they're real.  Three cheers for the subconscious!