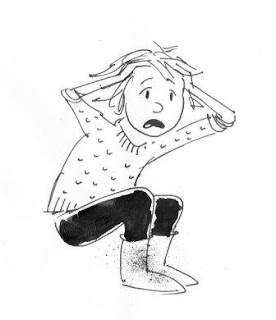 Excuse me, but may I complain?
I started this fortnight with rotator cuff injury.  What am I, a helicopter?  No, the rotator cuff belongs to the shoulder, and mine is inflamed from an excess of drawing, computer mousing, glass cutting, tennis and what-have-you.  It's been strapped, iced and manipulated.  I'm trying to make all my work practices more ergonomic, but it's hard to draw with an icepack on your shoulder.  I do envy ambidextrous artists like Landseer and Leonardo da Vinci.  Landseer reputedly could draw a deer with one hand while drawing a rabbit with the other, and Leonardo could draw anything with one hand while playing tennis with the other.  (I confess I don't believe this.  He would have required a very tolerant tennis opponent, which seems unlikely in Renaissance Italy.  Caravaggio stabbed his tennis opponent, possibly because he was drawing while he played.)

Anyhow, all this might have seemed enough.  But it wasn't.  On Monday I went into the garage to get the car and discovered that the woodheap had collapsed in the night.  On the car.  And two bikes.  You know that game, Pick Up Sticks?  Well, imagine a sort of gigantic game of Pick Up Sticks in which you gently remove logs of wood from your car bonnet while trying to prevent the further imminent collapse of a leaning pile of wood.  With a dodgy rotator cuff.  Now both the car and I are booked in for panel beating. 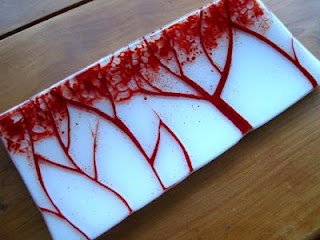 On a brighter note I made this plate, which is a tribute to our lovely autumn and also looks rather like an illustration.  It proved popular, so I'm making a series.

That picture of me clutching my head is a gross exaggeration.  My shoulder doesn't go up that far.