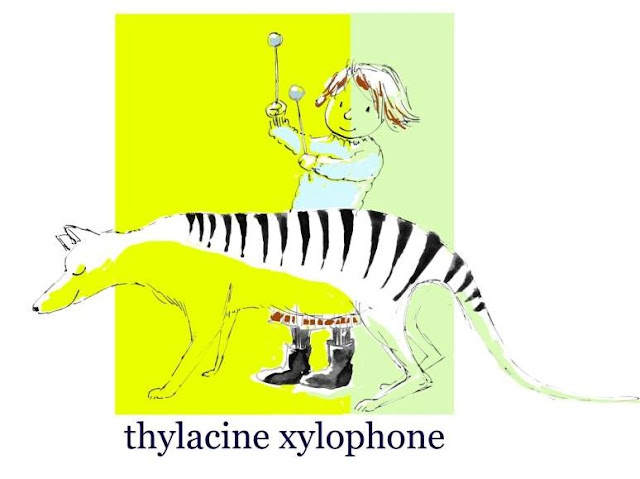 Has this young girl really got a pet thylacine ... or is it just her imagination?
These strange marsupials probably went extinct in the wilds of Tasmania in the 1960's (the last captive thylacine died in 1936), but they still haunt our collective Tasmanian memory.  Hence the recent picture book 'Dream of the Thylacine' by Margaret Wild and Ron Brooks, and the new film 'The Hunter' starring Willem daFoe.  This image is a rare light hearted look at the thylacine, and also a rare foray into Photoshop for me.  I don't really have the skills yet, but wanted to try using a flat colour design to hint that perhaps the thylacine isn't fully there.

I told my friend, glass artist Merinda Young of Tudor Rose Glass Works that I was doing a drawing of a thylacine xylophone.  Minutes later, she sent me this lovely verse that she composed 'while cleaning putty from windows':
This is the xylophone
about which it's rarely known,
that the faded thylacine
of clever wit, so hardly seen,
is most proficient, and alone
can also play the brass trombone.
Inspired by this week's Illustration Friday theme ('stripes'), I decided to alter my blog by-line to admit, I'm mad about stripes and use them in nearly all of my artworks!
Posted by Gay McKinnon at 3:40 PM