Sketchbook (and the Large Hadron Collider) 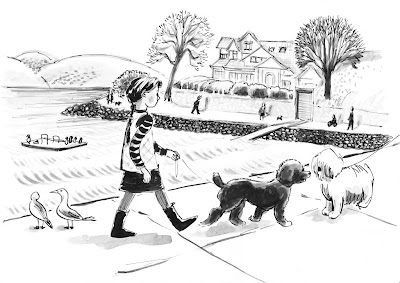 In the interests of getting out of the studio, last week I attended a public lecture on the Large Hadron Collider by a visiting UK physicist.

In case that sounds a bit desperate, just think: could you resist a lecture entitled "Uncovering the Mysteries of the Universe with the Large Hadron Collider"?  I couldn't, and here's what I learnt.  The LHC is a $6 billion circular tunnel 27 km in circumference, built 100m below the city of Geneva. (My mind effortlessly retains things I don't need to remember, so I'm pretty sure this is accurate).  It contains the best vacuum in the universe.  You thought space was a vacuum - forget it!  The LHC is way  more vacuum-y.  It's got, like, nothing in it.  Except protons, which are whizzed around in both directions at 10,000 revs/second so they smash into each other and generate smaller subatomic particles, which are then discovered.  So far, the LHC has discovered nothing but the quark, which we knew all about already.  (Apparently).  However, the speaker remained optimistically convinced that the LHC would soon uncover the secrets of the universe.  He showed a pie chart which revealed that only 4% of the universe is matter.  Some 20 odd percent is dark matter, which is invisible, and over 70% is Dark Energy.  At this point I had a sudden, terrible craving for chocolate.  The pie chart was coloured purple, like a Cadbury wrapper, and this combined with the words "Dark" and "Energy" just wrecked my concentration, so I don't remember anything after that.

The reason I mention all this is because World Science just reported that the LHC has found a theoretical particle called the Higgs Boson.  It hasn't really.  The data aren't significant, so don't be fooled !  Remember, you heard it here first!

The picture above is a sketchbook scene from the sea wall at Sandy Bay, where everyone was out enjoying a rare beam of winter sunshine.