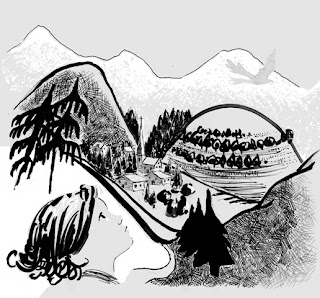 Hello all, I've been a slack blogger lately, but I do have an excuse - I've been working on a small scientific project, an illustration, and lots of glass for the summer season.  (And hey, it's nearly Christmas!)  Here's an artwork I did this week as an entry for the Tomie de Paola award.  The challenge was to create an illustration for the opening scene of Johanna Spyri's "Heidi".  It's hard to find a new way to illustrate this much-loved book, but I decided to play with the patterns and textures of the Swiss scenery, and had a lot of fun combining hand-drawn with Photoshop techniques (still very clunky in my hands, but I wanted a sort of chunky lino cut look, so I decided that was OK).  Interestingly, Tomie posted the first two paragraphs of "Heidi" using a different translation from the one I have, and I was amazed at the difference.  His translation is far more lyrical - mine has a quite matter-of-fact tone,  and I wonder now which version is closer to the spirit of the original.

Completely off this topic, we had some fun this week going to a film called 'Arctic Blast', surely the one and only disaster movie that will ever be filmed right here in Hobart, Tasmania.  I don't think this film will have a wide audience outside Hobart, but the cinema was packed with locals having a right old giggle.  See teenage surfers snap-frozen at the local beach as the arctic (surely that should be Antarctic?) blast rolls in!  See looting and panic at the local K&D when Hobartians realise things are about to get chilly (like we don't already own a full wardrobe of polar fleece and every type of heater?)  See ourselves lying frozen in the street and a plane crashing into the centre of our city, even though the flight path is thirty km out of town!  I'm not sure if it will be good for tourism.  I guess I'll find out if business plummets at the market.
Posted by Gay McKinnon at 7:25 PM