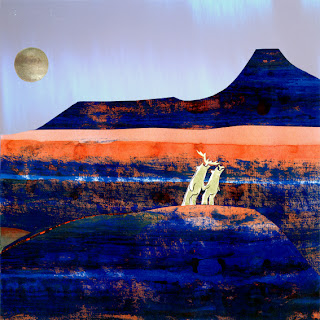 First, apologies to anyone whose comments or emails I've failed to answer over the last few weeks.  I've been away in the good ol' U.S. of A. (driving Route 66, no less!) and discovered to my chagrin that internet access for travellers has changed radically since my last OS trip.  Gone are the ranks of public computers in cafes and hotels, with their wacky local versions of QWERTYUIOP keyboards and mystery browsers.  Today's canny traveller carries a laptop, and hooks it into the local wifi.  On top of this, my webmail dumped a lot of legitimate emails into a spam folder, which I didn't know about.  Thanks for being in touch - I'm catching up today.

I came home to good news - before leaving I sent off five illustrations to the Australian Society of Authors, and they've selected me to be in their group submission to the Bologna Illustrators Exhibition!  The ASA are paying for the courier and insurance to send the selected entries to Bologna.  The works have yet to go through the final selection by the Bologna judges, but I'm thrilled to have been selected by the ASA as a first step.

The picture above is one that I sent to the ASA, and also formed part of an entry in the CYA illustrated book competition earlier this year.  One unimpressed judge found it 'earnest' and 'not going anywhere' although my style was 'freat' (I hope this was a typo for 'great', although I don't mind being freat), while the other thought it was 'wonderful, unique art' reminiscent of Shaun Tan (wow!)  Move over, Shaun!

Meanwhile, it's back to the drawing board - SCBWI are offering the Tomie dePaolaAward for an illustration of the opening paragraphs of Johanna Spyri's 'Heidi'.  If you want to have a go you can find the link here:  http://www.scbwi.org/Pages.aspx/Tomie-dePaola-Award
Posted by Gay McKinnon at 11:49 AM