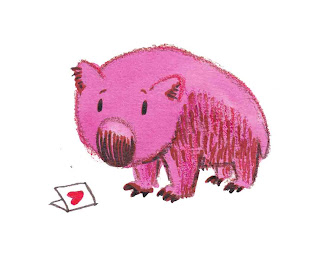 I was working on some little animal characters today, and remembered that I promised to blog about two workshops I did recently on 'character creation' with Leigh Hobbs (creator of the feisty Old Tom and Mr Chicken) and Dave Hackett (aka Cartoon Dave).
These two artists take quite a similar approach to developing characters.  First, they scribble something down quickly - two minutes at most.  They suspend all criticism at this stage.  Next, they play with their spontaneous ideas and try to extend them, or redraw any or all bits of them till they're satisfied.  As an exercise, Leigh got us to draw a piece of kitchen apparatus (grater, toaster, coffee maker), then rapidly add features and write a sentence that expanded our knowledge of the character beyond the picture.  This could become the first sentence of your picture book.  Dave had us scribble down a quick impression of an animal and then play with it.  His theory is that as long as a drawing of a snail or an elephant has 'snail bits' or 'elephant bits' - a shell, a trunk - it will be recognisable as a snail or an elephant, no matter how stylised it is.  I was relieved to see a piece of artwork that Dave had painted a dozen times before he was satisfied.  Seems everyone does this!  Leigh patches together drawings from multiple earlier drafts.
Here are a few characters I'm playing with at the moment.  I seem to have a strong interest in animals that are bad at sport.  There must be a book in that.. 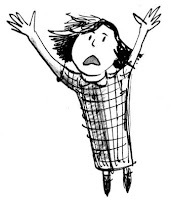 Nobody ever listened to Emma.

Sports day was difficult for Vanessa, Max and Helen.

Now THIS was what Larry called FLYING. 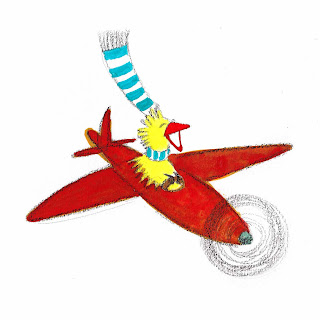