Bet you don't know what snert is.  Until recently, I didn't either.  Outside of cyberspace, the only time I've ever seen the word was on the side of a refurbished train used as a tourist attraction just outside Margate, Tasmania.  (Rail travel is not big in Tasmania).   The carriage in question was a cafe and the word was painted boldly between "Cappuccino" and "Sandwiches".  My friend and I pondered it for a while.
"D'you think they mean 'dessert'?"
"Yeah, right - they can spell 'cappuccino', but they think 'dessert' starts with 'sn'."
"I dare you to go in and order it."
"You're on."
We climbed inside and were greeted by a young waitress who gave us a menu.  We scanned it eagerly, but nowhere was snert listed.
"I'm going to order it anyway.  When she comes back, I'm just going to say really confidently, 'two snerts, please,' and see what happens."
"Ah, but you know what'll happen!  She'll say, 'How would you like that?' and you won't know whether to say, 'white with two sugars' or 'medium rare'."
The waitress came back.  We burst out laughing and ordered hot chocolate.  Much later, I remembered to Google snert.  It's traditional Dutch pea soup, flavoured with a ham hock, and so thick the spoon stands up in it. It's also the name of Hagar the Horrible's little dog.
Can anyone recommend a good recipe for snert?
Here's my favourite character Bean waking up and having a cup of snert. 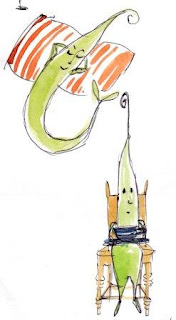