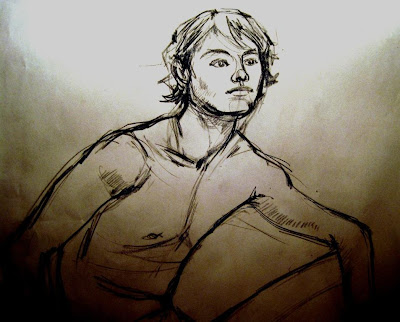 Just had another great morning with the life drawing group at Battery Point.  Our model was Tom, who had all the wiry energy of the young Mick Jagger minus the bad attitude.  He insisted on holding out his arms horizontally for twenty minutes.  The only other model I can ever recall doing this was an acrobat from Circus Oz.  There was some lovely work by the other artists including a Japanese Manga-style interpretation of Tom.

Speaking of Mick Jagger, ABC2 is showing a really amusing new Australian comedy series about the live music scene on Monday nights at 9 pm.  "I Rock" follows the tribulations of fictional struggling pub rock band, Boy Crazy Stacey, and is filmed partly at the Annandale Hotel in Sydney. BCS's desperate efforts to win competitions, glean invitations to music festivals, gain recording contracts, etc. are hampered predictably in every episode by the actions of their egotistical lead singer Nash, who can't help alienating everyone around him.  Josh Mapleton plays Nash and also wrote the show.  Here's a link: http://www.abc.net.au/tv/irock/default.htm 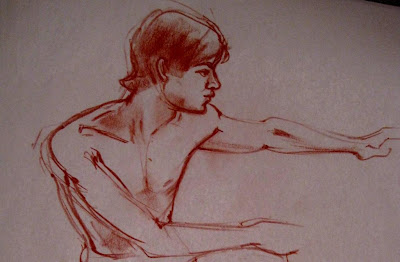