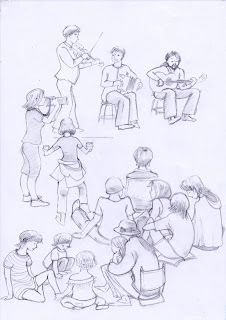 We've just struggled home, battered but totally satisfied, from the 34th Port Fairy folk festival.  It was hard work listening to so many of the world's finest musicians from 10 am to midnight three days running, but it just had to be done.  There were folk legends from around the world - including John McCutchen, Vin Garbutt with his mad patter about Rudyard Kipling, and Dougie MacLean - and any number of fresh and surprising new acts.  I was hooked on the spot by Kristin Andreassen's song, "Crayola doesn't make a colour for your eyes" and by the witty Egan sisters, Alicia and Alanna. I also went to the launch of Jim Haynes' new collection, The Big Book of Verse for Aussie Kids.  It's a great book with (I think) over 600 poems, although somebody forgot to include an index.  When I couldn't take in any more, I sketched the folk.  Here they are at Mairtin O'Connor's concert.

A Port Fairy character
I don't know who he was.  He glided noiselessly through the crowd, flapping gently.
Posted by Gay McKinnon at 8:08 PM